NJEDA Warns that Underfunded Grant Program Will Be Oversubscribed, Leaving Many Applicants with Nothing 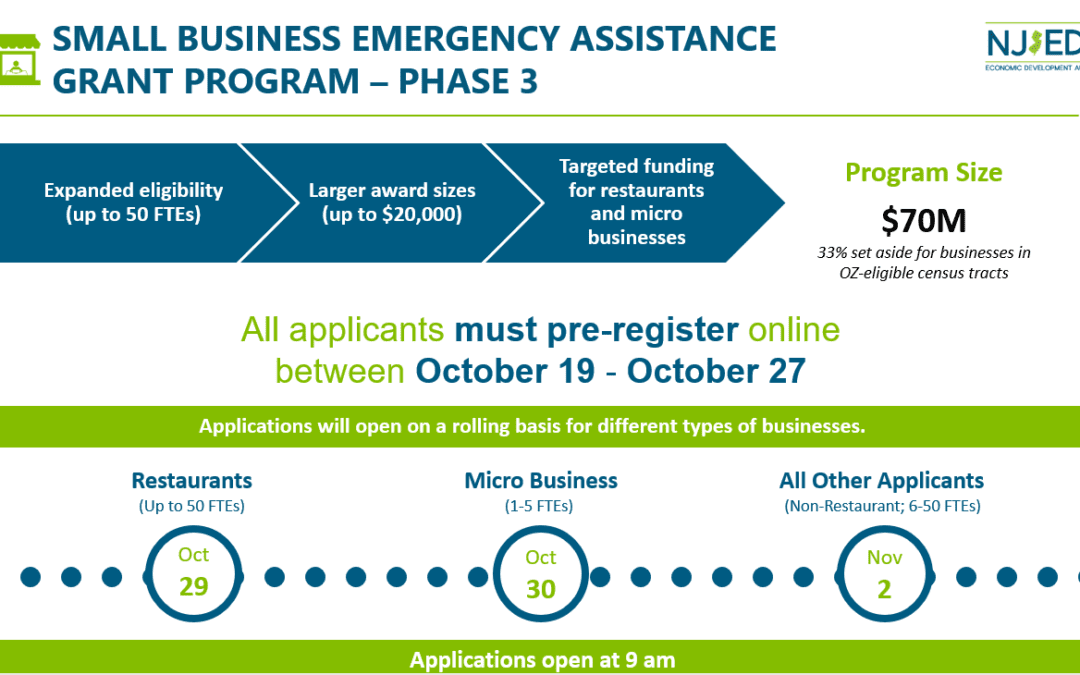 With warnings from the New Jersey Economic Development Authority (EDA) that Phase 3 of its emergency business grant program will be oversubscribed, Senator Anthony M. Bucco urged Governor Phil Murphy to dedicate more of the billions in CARES Act relief funds at his disposal to bolster the relief program that could keep thousands of small employers in business.

“During a webinar this morning (October 27), the EDA warned that Phase 3 of New Jersey’s emergency business grant program won’t have enough funding to meet the overwhelming demand for assistance,” said Bucco (R-25). “They also acknowledged that New Jersey’s business grant program is far less generous than what other states have offered. It’s evident that we’ll have many more small employers close their doors permanently if Governor Murphy doesn’t put more CARES Act funds behind this critically important program.”

New Jersey received $2.4 billion of emergency relief funding through the federal CARES Act to support businesses, nonprofits and local governments that have been impacted by the coronavirus crisis.

Governor Murphy has dedicated just $70 million of those federal relief funds to support the current round of small business emergency assistance grants through the EDA.

In contrast, South Dakota made $400 million available from its share of CARES Act funds to support businesses and nonprofits. Similarly, Pennsylvania dedicated $225 million.

Instead of dedicating similarly large amounts of CARES Act money to help New Jersey’s small businesses and nonprofits, the Murphy administration has prioritized supporting the State budget with those funds, including the allocation of $450 million to pay for State employee salaries.

“While the State of New Jersey isn’t in any danger of going out of business, Governor Murphy is diverting huge chunks of New Jersey’s CARES Act funds to subsidize his administration,” said Bucco. “At the same time, many of our downtown restaurants, Main Street shops, and small employers are on the brink of permanent closure if they don’t get more aid.”

According to the EDA, more than 20,000 applicants have pre-registered already for a chance to apply for Phase 3 funding for grants ranging from a maximum of $5,000 to a maximum of $20,000, depending on the size and type of business.

While the governor has made just $70 million available to fund the current grant program, it would take at least $100 million of funding to provide the smallest $5,000 grants to all of the applicants.

The underfunded program will accept applications later this week from pre-registered employers on a first come, first served basis, ensuring that many desperate applicants walk away with nothing.

“We’ve had businesses that were rejected twice already for emergency assistance grants because Governor Murphy didn’t make enough money available in the first two rounds,” added Bucco. “I’m worried that three strikes will put many employers who are rejected again out of business. The governor needs to rethink his funding priorities and do it quickly.”