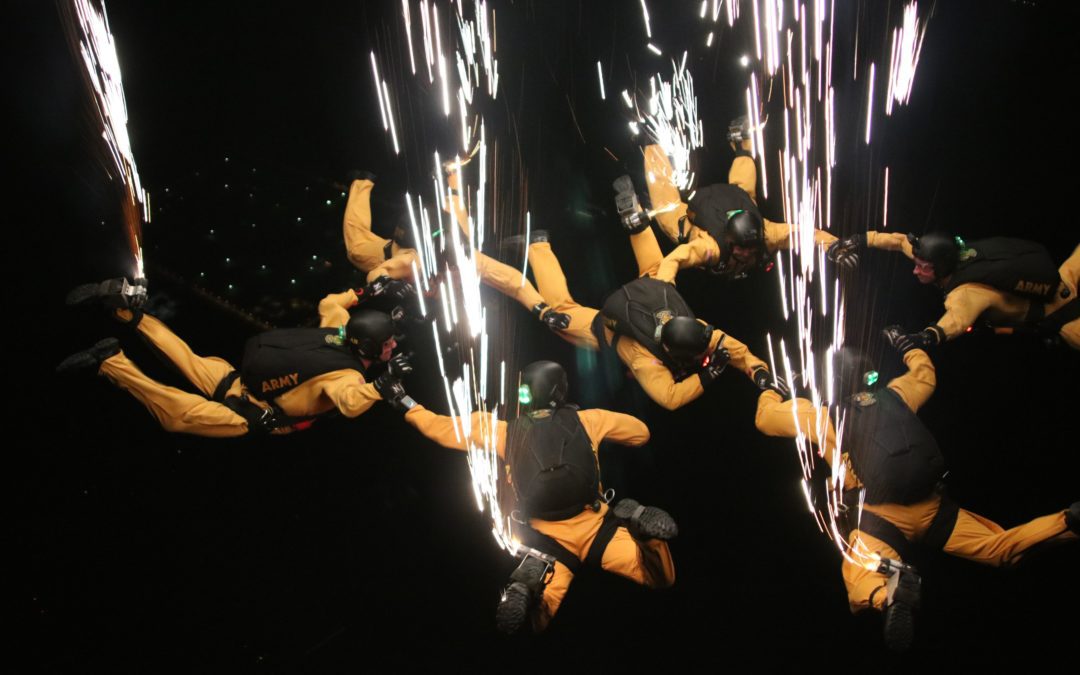 The Greater Atlantic City Chamber will host the first Red, White, and Blue Beach BBQ as part of the opening ceremonies celebration for The Atlantic City Airshow “A Salute to Those That Serve.” Ticket holders will dine with representatives from all five branches of the military, and pilots and crew members that perform in the Atlantic City Airshow. The one-of-a-kind beach BBQ will feature traditional BBQ fare provided by Dickey’s Barbecue Pit. Highlighting the event will be an evening jump by the United States Army Golden Knights. The event will take place on Monday, August 19 at 6:30 PM at the Bellevue Avenue Beach in Atlantic City.

Individual adult tickets are $65 and children 12 and younger are $35. Groups larger than 12 can contact the Greater Atlantic City Chamber at (609) 345-4524. Tickets can be purchased by clicking here.

In addition to the Royal Air Force Red Arrows, USAF Thunderbirds, GEICO Skytypers, and the US Army Golden Knights, the following aerial demonstrations have been added to 2019 lineup:

Jim Beasley P-51 Mustang: Beasley is an accomplished warbird and aerobatic pilot, with commercial and multi-engine instrument ratings, and is one of the few pilots in the world qualified to operate high-performance World War II fighter aircraft, such as the North American P-51 Mustang with the USAF Heritage Flight Program. He resides in the Philadelphia area and has participated in every Atlantic City Airshow since the first event in 2003.

Ace Maker Airshows T-33: The T-33 was one of America’s first operational jet fighters and trainers. Flown by Greg Colyer, the aircraft is based in California and flies airshows all over North America each year. Fans will enjoy seeing the T-33 “Shooting Star” jet aircraft as it performs picture-perfect passes, vertical rolls, inverted aerobatics and more.

Lucas Oil, Mike Wiskus: Mike’s air show career is a testimony of how dreams really can come true. As a 2002 U.S. National Aerobatic Champion, and a member of the 2004 U.S. Aerobatic Team, Mike has traveled the world with the same aircraft, the Pitts S2S, you will see him performing in at this air show. His excitement for aviation and willingness to share his experience with people around the country is nothing short of contagious in his attempt to help encourage kids of all ages, to not only dream, but to live their dreams and never give up!

Lee Leet Short Tucano T Mk1: The Short Tucano is a two-seat turboprop basic trainer used by the Royal Air Force. It was developed in order to meet a requirement to replace the Jet Provost as the basic fast-jet trainer for the RAF. Lee will take the aircraft through a tactical aerobatic demo that is sure to amaze everyone with loops, rolls, snap rolls, hammerhead turns, and Cuban-8 maneuvers.

Jerry Conley and the Vampire Jet: Development of the aircraft began during the Second World War in 1943 as an aircraft suitable for combat that harnessed the new innovation of jet propulsion. Originally ordered as an experimental aircraft only, the decision to mass-produce the aircraft as an interceptor for the Royal Air Force (RAF) was finalized in May 1944. The aircraft is partially made of wood and is the first operational jet fighter of the Royal Air Force. Jerry performs in the aircraft all over North America with a fast paced, low level jet aerobatic routine.

Sponsorship opportunities are available by calling Michael Chait, Executive Vice President, at (609) 345-4524 ext. 102 or via email at mchait@acchamber.com.